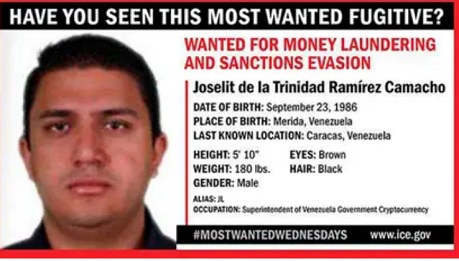 The United States Department of Immigration and Customs Enforcement (ICE) on Monday included Joselit de la Trinidad Ramírez Camacho, crypto superintendent of Venezuela, on its most wanted list, Joselit de is accused of laundering illicit funds while holding public office, the right hand of the oil minister who is also sanctioned for drug terrorism.

The  Immigration and Customs Enforcement (ICE) offered a reward of over $ 5 million for information leading to his arrest and conviction.

According to reports from Infobae , the wanted Joselit de la Trinidad Ramírez Camacho is rumored to be the right-hand man of Tareck El Aissami , Chavez’s oil minister who is also sanctioned by the United States for drug terrorism.

The United States Department of Immigration and Customs Enforcement (ICE) , through its Department of Homeland Security Investigations (HSI), announced that the Venezuelan official was included in the agency’s most wanted list , following an investigation by HSI’s El Dorado Financial Crime Task Force, New York.

Through the rewards program, US authorities offer up to five million dollars “for information leading to the arrest or conviction of Joselit de la Trinidad Ramírez Camacho, a Venezuelan government official accused of having deep political, social, and economic ties to multiple alleged drug lords, including Tareck EI Aissami. ”

Ramírez Camacho is currently Venezuela’s superintendent of crypto and has been charged in the Southern District of New York with laundering illicit funds while holding public office in the Venezuelan regime.

Along with the Narcotics Rewards Program, more than 75 major narcotics traffickers have been brought to justice since these programs began in 1986. The State Department has paid more than $ 130 million in rewards for information leading to those arrests, ”says the State Department.

“The Office of International Narcotics and Law Enforcement Affairs administers these rewards programs in close coordination with the Drug Enforcement Administration (DEA), the Federal Bureau of Investigation, Immigration and Customs Investigations / Homeland Security (ICE / HSI) and other agencies. These actions demonstrate the State Department’s commitment to supporting law enforcement efforts and an entire governmental approach to combat transnational organized crime, ”he adds.

Mike Pompeo , US Secretary of State, highlighted this new measure of pressure against the Chavista dictatorship : “Today the United States announced a reward for information to bring to justice another official of the Maduro regime responsible for international transnational organized crime. We will continue to work with the Department of Justice to protect American citizens and help Venezuelans restore their democracy. ”

On March 26, the US Department of Justice announced drug charges against the main figures of the Chavista regime , and offered a reward of $ 15 million for information that would allow the arrest and prosecution of Nicolás Maduro.

The Department also offers rewards of up to $ 10 million each for information related to Diosdado Cabello , head of the National Constituent Assembly; General (retired) Hugo Carvajal Barrios , former director of the Venezuelan Military Intelligence (DGCIM); and Tareck El Aissami , then Minister of Industry and National Production, and current Minister of Petroleum.

Among other officials and leaders, Maikel Moreno , President of the Supreme Court, Vladimir Padrino López , Minister of Defense, was also implicated as the main actors in the criminal scheme, and Samark López Bello , a businessman with a series of crimes linked to money laundering. in favor of Maduro and El Aissami.