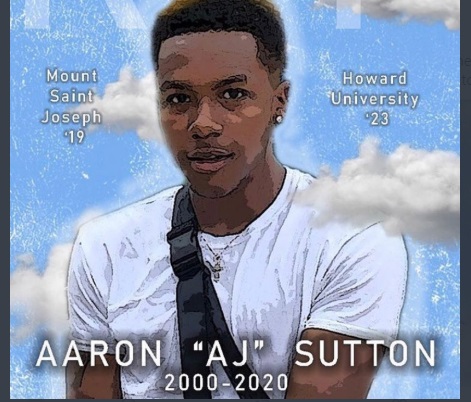 According to reports Aaron James Sutton was shot and killed  days before any protest began in Baltimore, Maryland.

AJ Sutton death have left his family and friends completely distraught on hearing that AJ had suddenly passed in such a violent manner.

Due to his unexpected death, his mother, Wanda Sutton, and sisters are plagued with the task of raising money to pay his funeral costs, and planning funeral arrangements. A GofundMe account has been created to raise money to ease their family in AJ’s funeral.

No report yet from police about AJ Sutton’s death but hopefully updates on investigations by police to what led to his death will be released soon.

Howard University Royal Court has reacted to the sudden death of AJ Sutton via their twitter handle. In a series of tweets they wrote “We are truly saddened by the passing of one of our very own Bison to the act of senseless gun violence. Aaron “AJ” Sutton was a true light who wanted to better himself and make his dreams a reality. Admired and loved by so many, you will be missed King. Rest In Power”.

Another twitter user wrote “Today we lost a member of our Howard community. AJ Sutton was only 19 and was killed in a shooting last night. He was only a freshman, but had ambition and plans for his future that were tragically cut short. Everyone please send thoughts and prayers to AJ’s friends and family.”