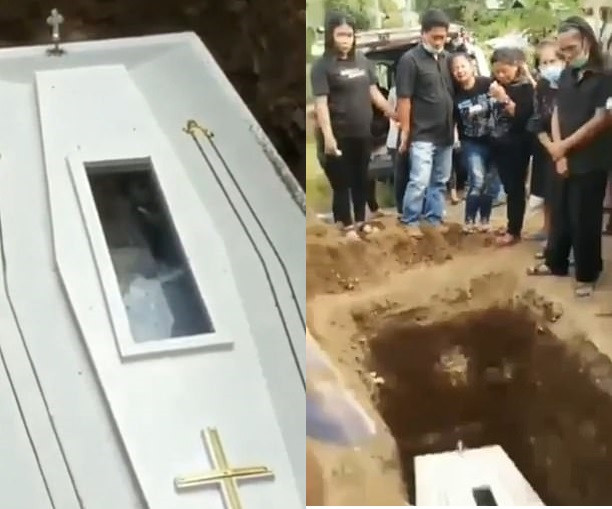 The whole thing about a corpse waving hands during burial will sound strange to you, but it took place in Indonesia last week during a burial.

Below is the strangest of all strange videos ever, it was a sight meant to put many people wondering and demanding more question as the strange event which was filmed by one of the mourners during burial occurred, the deceased was being buried during a Christian service in the city of Manado in North Sulawesi, Indonesia, on May 5 2020.

While the priest said his last words for the deceased a bizarre scene took place demanding answers of how possible a dead person can still wave hands while still inside the casket.

The devastated family of the deceased gathered around, a hand and fingers could be seen moving under the glass panel in the casket.

As the priest continued saying: ‘God has said in the book of John. I am the resurrection and the life. Whoever believes in me he will live even though he is dead.’

The video has kept many asking lingering questions if actually the person inside the casket had died for real or they are actually taking internet users for a ride.

Buried alive? Viral video shows haunting moment corpse appears to wave to mourners through coffin’s glass panel This happened during a Christian service in the city of Manado in North Sulawesi, Indonesia, on May 5.