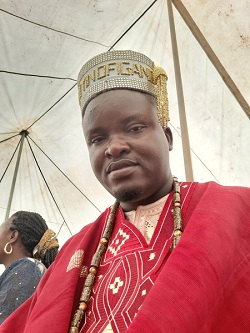 The sad news of his death was briefed on Monday through a Twitter user with name: @i_amfola who paid a touching tribute to him writing –
“Words failed me. What did i wake up to see on twitter this morning? Otunba #Bet2Win Is Dead Loudly crying face Ahh! Yes your wins amaze lot of people worldwide and sometimes wonder how you do it. You were a giver, philantropist, #laboom founder. Rest in heavenly places #RipOtunba”

Although we could not gather enough reason behind Otunba’s sudden cause death but a post he released on 5 May could possibly give a clue to what actually happened to him.

In the tweet the late Otunba tweeted how he fell ill recently and his doctor had advised him to take time enough and rest and finally ask for prayers from his fans on Twitter….

“I was rushed again to hospital this morning, My Doctor insisted I need a lot of rest

I feel useless, now, I understand better that Health is Wealth – Remember me in your prayers

Thank you” he concluded.

I was rushed again to hospital this morning

My Doctor insisted I need a lot of rest

I feel useless, now, I understand better that Health is Wealth

Remember me in your prayers

According to reports escalating from sources, last week Thursday 7th May the late Otunba tweeted that he was rushed back to hospital & doctors advised that he needs rest while urging his followers to member  him in prayers. A close friend and Punter also confirmed that the last they chatted he told him it was Ulcer.

Since his death, Fans has trouped in their numbers to his twitter & telegram channels to mourn the influential Bet Punter while some prays it’s all clout. But an ardent follower confirmed his death having contacted his brother who confirmed his demise.

Otunba, as he is commonly called has 10.3m followers on twitter.