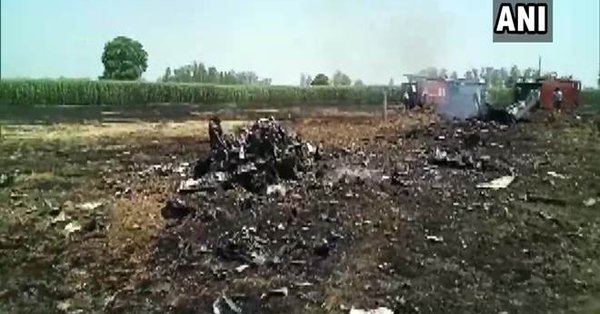 A Mig29 which is an Indian Air Force (IAF)  fighter jet on Friday crashed in Chuharpur village in Punjab after it developed a technical fault.

According to reports, the fighter jet, which was on a training mission from an Air Force base near Jalandhar, met with a snag and burst into flames soon there  after it crashed into a field in the village.

Luckily the pilot in control of the Mig29 jet managed to safely eject before the accident and has been rescued by a helicopter, said the Indian Air Force.

A Mig-29 fighter aircraft of the #IndianAirForce (IAF) crashed in Chuharpur village here on Friday due to a technical snag and burst into flames, officials saidhttps://t.co/GKfLCi7AW9

IAF have already confirmed the news of the Mig29 plane crash, in a statement they released on Friday  saying:

“On 08 May 20, at 10:45 am, one Mig-29 aircraft airborne on a training mission from an Air Force base near Jalandhar met with an accident. The aircraft had developed a technical snag and the pilot ejected safely as he was unable to control the aircraft. The pilot has been rescued by a helicopter,”

Senior officials of Nawanshahr and Hoshiarpur districts on Friday has reached the spot. Chuharpur village is located at the border of the two districts.

Related Topics:How much is mig29 plane in Indiamig29 plane