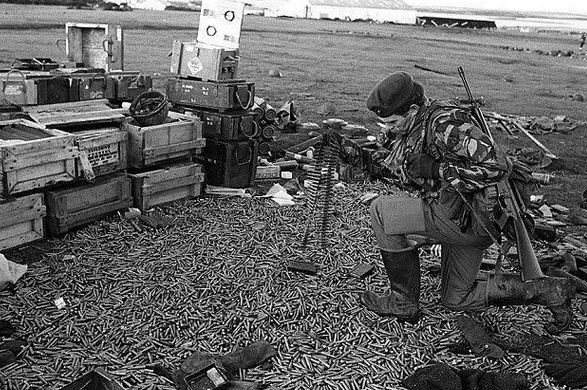 Do you know why soldiers don’t dare try to use their enemy weapons once they run off supply of their own ammunition? some time ago i was watching an action stared movie one soldier ran out of weapon and immediately he left the battle ground when there where enemy ammunition layering around him. there are so many reasons behind this, In the military community it is always considered poor form to let your opponent capture usable ammunition and if you are not sure how to  use  your enemy weapon what then is the need to use it.

According to story shared online by a retired military soldier he said: “During the 1982 Falklands war, in the fighting near Goose Green, some elements of 2 Para ran very low on 7.62mm NATO ammunition. Once the objective was taken, there was indeed some resupply of this ammunition from captured Argentine stocks, since the Argentines used the same cartridge, and their battle rifles were similar to those of the British forces.”

Over 10,000 rounds of usable 7.62mm ammunition were captured by the British here, out of a total of more than 4 million such rounds captured during the conflict.

Although there reasons a soldier could possibly have for not picking his enemy weapons when he has run out of ammunition.

There is a term called Friendly Fire, it a is situation where If your side uses M-4 rifles or similar, and the enemy uses AK-47s, which have a very distinctive sound when fired, then your using a fallen enemies AK would make you a target of friendly fire just based on the sound. The last thing you want in combat is to get shot at by both the enemy and yourself.

The level of training a particular soldier has on the use of certain weapon may not be the same with the other opponent during war, it is clear that one will not use what he has no knowledge of, a soldier may not know how to use an enemies rifle effectively or maybe at all.

Another one is safety, It is extremely unwise to pick up and use a firearm that you have not personally inspected and cleaned, ideally stripping it down and reassembling it in the process. If you’re on a battlefield, odds are that you have not had time to do this. (Let’s face it, that is a rather hectic environment.) It is entirely possible, especially in the case of artillery or air strikes, that whatever felled the enemy soldier also damaged his weapon. A subtly bent barrel would be the death of accuracy, and might block a bullet enough to make the breech explode from back-pressure.

If I were a commander and observed that enemy soldiers were picking up fallen weapons, I would consider finding a way to salt the ground with at least a few faulty or sabotaged weapons or prepared ammo either rigged to explode on firing, known to be duds, or expected to jam enemy weapons when used in them. A simpler expedient might be to exploit the enemy’s taste for picking up fallen weapons by making attractive booby traps of them.