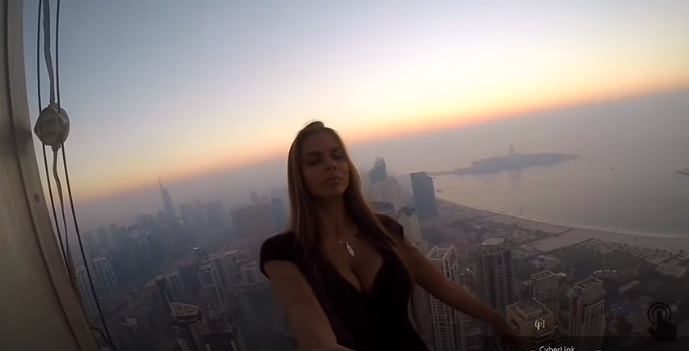 Viktoria Odintcova has been trending online for sometime now, but why if i may ask? she is a Russian model who has refused to stop trending with her shocking and scary style of taking selfies.

Viktoria in previous pictures she took back in 2017 posted on her Instagram account on February 3 was standing with a companion on the rooftop ledge of Cayan Tower in Dubai Marina and this took many people by surprise.

As she dressed in denim hotpants, a plunging t-shirt and trainers, Odintcova is seen leaning back over the edge of the fondly named ‘twisty tower’ while holding onto her friend’s hand. A portable camera clenched between his teeth, records the footage.

She then lowers herself down over the side of the building with nothing but a 300m-drop and the busy waterways of the marina below her. With no safety harness, and still using just one hand, the model twists in the wind – and flicks her hair over her shoulder – as she completes the death-defying stunt.

“Crazy!!!” wrote one @patyuberti, “This is called beauty without brain!!!” typed @boylungangte and “stop doing that” posted @halohodor.

According to reports, Victoria’s skycrapper antics has long been her style especially in the Arabian enclave, Dubia. she took a six minutes of the same stunts which was originally uploaded to Youtube on January 26.

In her words she said: “Although the Cayan Tower has been periodically used for extreme sports events, in all cases there has been safety, security, and emergency services on site. We have a process of selecting trained professionals skilled at their craft, especially these high-risk life-threatening events, and carry out a stick review of the safety measures and backup safety measures before approving the event,” explained Gizel Daher, Director of Marketing & Communications.

“Under no circumstances can we condone Ms. Odintcova’s irresponsible actions, and we are in the process of reviewing our security procedures to understand and rectify where the lapse occurred and how to prevent such in the future.”

Titled: Instagram queen dangles off a 1,000ft-high Dubai skyscraper without ANY safety equipment.

In a recent report published by Dubaiofw.com said that Cayan Group in a statement condemed the Russian model performing in a daredevil stunts by hanging on the edge of the Cayan Tower roof top.