Who Is Shahan Ramkissoon

Shahan Ramkissoon has had years of television experience in Africa and more recently in the United States, Born and brought up in Durban, KwaZulu-Natal, Shahan has steadily built a credible journalistic career for himself and can best be described as “a consummate pro”.

His daily work deadlines under extreme pressure have proven that he can deliver beyond expectation. His love for creative works should not be confused with the unique style he brings on-air as both a specialised reporter and anchor.

Shahan Ramkissoon was born and brought up in Durban, KwaZulu-Natal.

Shahan Ramkissoon is still Single and searching, but we know that as a handsome young man he must be engaged though not yet made public.

As of the time of writing this report, we have not been able to know much Shahan Ramkissoon’ love life but we are certain he is currently engaged.

Shahan Ramkissoon is a News Anchor at eNCA news.

He was a former US Correspondent at Arise News.

Shahan worked as the former Foreign Correspondent at Arise New

Shahan Ramkissoon worked as a Reporter at E-News channel

Shahan was able to break down complex issues and tell them in the most simple and visual form possible. One example would be explaining the ANC’s so-called “second transition” so that our viewers would be able to understand just how the ruling party planned to improve the lives of poor South Africans.

Correspondent with Arise TV
He has worked as a correspondent reporter from  Jun 2013 – Jan 2014 for 8 months in Johannesburg Area, South Africa

He covered major news events in Southern Africa, including Nelson Mandela’s death and the 2013 Zimbabwean elections.

Anchor and Correspondent with Arise News

He travelled a lot across the US to cover major stories, with a particular interest in Africa.

Shahan currently works with eNCA as an anchor for breaking news from 9 am -1 pm. (Since  Apr 2017 – Present)

Shahan Ramkissoon On The News In eNCA Studio

“I’m setting the record straight, I shape my own beard and the office hairstylist is fixing my hair during the lockdown. Here’s proof.” – Shahan Ramkissoon

Shahan is not only a South African television news anchor he has been into CrossFit and bodybuilding on and off for over two years. like he said, “I’m not one of the strong guys.” 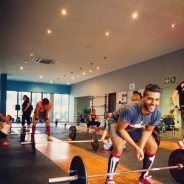