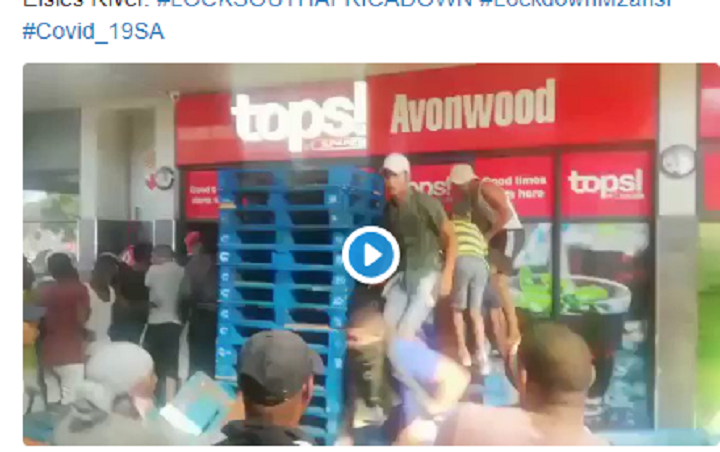 Barley few days Minister put restrictions on not to sell alcohol during lockdown now many people have used the advantage to loot liquor stores across the country.

The footage had many people looting a Spar Tops liquor store located in Cape Town, this time in Avonwood Elsies River.

There where no sight of the police or the security operatives to distance these people from the store.

On Monday police in Tshwane District tracing team arrested two suspects in one of the Saulsville hostels for allegedly breaking into a liquor store and looting it of bottles of alcohol during lockdown.

The security operatives received information that a Boxer Liquor store was broken into and looted at the Nkomo Village Mall by an unknown number of people.With similar looting of liquor stores reported in other parts of the country like Cape Town over the weekend, they carried out an intense investigation to unleash the criminals who had looted the Atteridgeville store.

According to the police spokesperson constable Tumisang Moloto who is incharge of the area disclosed that they had a tip search to a hostel in Saulsville where a 36-year-old man and his 32-year-old woman were arrested in separate rooms after they were found in possession of an unlicensed 9mm pistol, five bottles of whisky and a SAPS uniform.

“At this stage more arrests cannot be ruled out. Further investigation will be conducted to check if the two are linked to other related crimes in the area.

“Tshwane district commissioner Major-General Tommy Mthombeni commended all members who took part in the operation which resulted in the arrests of the two suspects.

As at the time of filing this reports there has not been any police response on the scene of the incident, we are yet to receive any information from the security men.